Barbara Shelley is an English actress best known for her roles in many of the Hammer horror films of the 1960’s.   She was born in London in 1933.   Her film career began in Italian movies in the mid 1950’s.   She then gained smal parts in international films like “The Little Hut” with Ava Gardner and Stewart Granger in 1957.   Among her  notable fims we must mention “Dracula, Prince of Darkness”, “The Gorgon”, “Rasputin the Mad Monk” and “The Camp at Blood Island”.   She has now retired from acting.   Interview with Barbara Shelley in “Express Newpapers” can be read here. 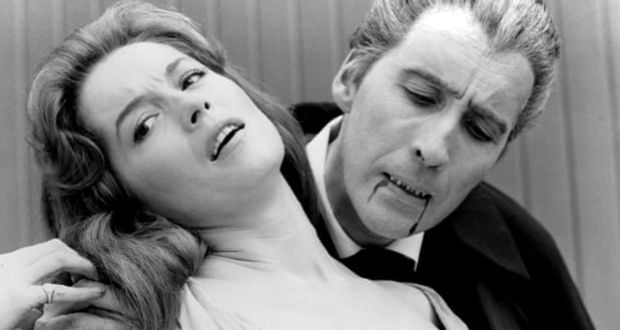 Barbara Shelley and Christopher Lee in Dracula: Prince of Darkness (1966), which ‘traumatised and tantalised’ generations of viewers. Photograph: Everett/Rex

During the heyday of Hammer, the Berkshire-based film production company that transformed the horror genre, there were few surer signs of a film’s integrity than Barbara Shelley’s name in the credits. The copper-haired Shelley, who has died aged 88 after contracting Covid-19, brought elegance and conviction to her work. She possessed a grounded, rational quality that instantly conferred gravitas on whatever lunatic occurrences were unfolding around her.

In Dracula: Prince of Darkness (1966), she gave a deft two-sided performance as the straitlaced Helen, who becomes a ravenous bloodsucker after being taken under the bat-wing of the Count, played by Christopher Lee. When next we meet her in his Karlsbad castle, she assures a stricken friend that “nothing’s wrong”, only for her lips to part to reveal tiny pointed fangs.

Generations of viewers were traumatised and tantalised by that scene, as well as a later one in which Helen taps on her friend’s window in the middle of the night. “Please let me in,” she pleads. “It’s cold out here. So cold. Everything’s all right now.” Shelley makes the appeal sound so reasonable that any one of us would surely have unfastened the latch.

She should be much bigger than she is, but I don’t think she really cares whether she is a star or not. She can act, God, she can act!

Helen’s eventual demise, held down on a table by monks as a stake is driven into her heart, was physically demanding on Shelley, who suffered from chronic back pain. Nevertheless, she was proud of that scene. “There’s absolute evil in there when she’s struggling,” she told Mark Gatiss in his 2010 documentary series A History of Horror, “and then suddenly she’s staked.

She also recounted how she and Lee, who prided themselves on being “un-corpseable”, would compete to make one another laugh during takes.

For Quatermass and the Pit (1967), her last of eight films for Hammer, Shelley was part of a team of scientists investigating an alien spacecraft found during an expansion of London’s underground transport system. She kept her cool while decomposing aliens were disinterred from the tunnels and ferried past her, dripping with green goo. When she fell under the electro-magnetic spell of the spacecraft, her body convulsing as images of alien life were fed into her brain, she made the ordeal look painfully believable.

Shelley named the picture’s director, Roy Ward Baker, as her favourite of all the film-makers she had worked with. He, in turn, told Bizarre magazine in 1974 that he was “mad” about her. “Mad in the sense of love,” he said. “We used to waltz about the set together, a great love affair. It puzzles me about her. She should be much bigger than she is, but I don’t think she really cares whether she is a star or not. She can act, God, she can act!”

She was born Barbara Kowin in London. She worked as a model but found that precluded casting directors from taking her seriously, despite her theatrical training. A fleeting role in the Hammer whodunit Mantrap (1953) came her way but she enjoyed better luck in Italy, where she worked as both model and actor after being discovered by the Italian comic Walter Chiari while on holiday in Rome.

Returning to the UK four years later, Shelley was put under contract by British Lion and cast in Cat Girl (1957), an unofficial remake of Jacques Tourneur’s 1942 Cat People. To prevent too much of her body being shown during nude scenes, she wrote “STOP” on her chest. She also refused to appear topless in Blood of the Vampire (1958), in which she was menaced by Sir Donald Wolfit, and threatened to sue the studio if it went ahead with a body double.https://8d2c73e993bd21e28fd0c48fbcdc9094.safeframe.googlesyndication.com/safeframe/1-0-38/html/container.html

She had no issue, however, with a revealing seduction scene in Rasputin, The Mad Monk (1966). “That scene was in the script when I read it,” she told Fangoria magazine in 2010. “The scenes I refused to do were when they suddenly would say to me, ‘Oh, you take your clothes off here’. The answer to that was always no.”

In Village of the Damned (1960), adapted from John Wyndham’s The Midwich Cuckoos, she was heartbreaking as a woman who gives birth to one of a breed of malevolent telepathic children. For one of her first woman-turned-monster roles, in The Gorgon (1964), she offered to have snakes draped over her. “I wouldn’t need any makeup,” she told the studio, “just a green face and the headdress of real snakes.”

Surprised enough when her proposal was rejected, and another actor (Prudence Hyman) cast as the monster into which her character transformed, she was positively crestfallen when she saw what the effects department produced instead. “They came up with these terrible sorts of rubber snakes dancing around, and it just looked awful. It wasn’t frightening at all.” She called it “probably the biggest regret I’ve had in any film I ever made” though she admired the look of the picture, noting that “every shot . . . resembles a Rembrandt painting”.

Shelley claimed not to have grasped the reach of her horror movies until she began attending fan conventions. “I realised that my work had been appreciated and that I had – through those horror films – actually reached a far bigger audience than I would ever have done if I’d stuck to the theatre.”https://8d2c73e993bd21e28fd0c48fbcdc9094.safeframe.googlesyndication.com/safeframe/1-0-38/html/container.html

Any irritation she felt stemmed from the emphasis placed on the sexual component of her films. “I had one or two dissertations on horror sent to me by students, and all the discussion ever seems to be concerned with is exploitation and the licking of blood and a scene of people making love, and it’s not right. It annoys me intensely, because my career was not built on exploitation and sex. It was built on working very hard.”

She retired from acting in 1988. Though she never got around to writing her autobiography, she had a title in mind: What’s a Nice Girl Like You Doing in a Film Like This? – Guardian

The sexy lady subsequently dubbed “The First Leading Lady of British Horror” was born Barbara Kowin in 1933 in London, England. With her beautiful looks and stature, she worked as a model during her salad days. Her film career began in Italy in the mid-1950s in such tempting fare as New Moon (1955) [New Moon] and Nero’s Mistress (1956) [Nero’s Mistress], but when it seemed like she was going to remain in the minor ranks, she returned to England to try to better her career. After appearing in the minor sex farceThe Little Hut (1957) with Stewart Granger, David Niven and Ava Gardner

, Barbara caught a bit of film notoriety in the title role of Cat Girl (1957), a low budget production in which she played a woman possessed by a family curse who develops psychic links with a leopard. This paid off and she quickly evolved into a popular Gothic glamour woman at Hammer Studios. Starting things off with The Camp on Blood Island (1958) and Blood of the Vampire (1958), the lovely actress proceeded to stake out her own lucrative territory in the horror genres. Throughout the 1960s she co-starred in the classic Village of the Damned (1960), along with The Shadow of the Cat (1961), The Gorgon (1964), The Secret of Blood Island (1964) (which was the sequel to her aforementioned Camp on Blood Island), Dracula: Prince of Darkness (1966), Rasputin: The Mad Monk (1966) andFive Million Years to Earth (1967). By the late 60s, however, Barbara’s film career had fallen aside and she turned to TV. Retired now, she has pursued interior decorating in recent years. Whether playing female monsters or their intended victims, Barbara played it straight and handled it all with requisite style and grace. For this, she is now occasionally seen by film fans at conventions as an integral figure of camp horror history.