Assi Dayan was born in 1945 and is the third son of the Israeli politican Moshe Dayan.   In 1967 he won critical praise for his performance in the film “He Walked Through the Fields”.   In 1969 he starred with Anjelica Huston in “A Walk with Love and Death” which was directed by John Huston.   He has directed on film and television,     He died in 2014.

Assi Dayan, one of the most celebrated actor/directors in the Israeli entertainment industry, and also one of its most troubled souls, died in Tel Aviv on Thursday at the age of 68.

The son of the late defense minister and general, Moshe Dayan, Assi starred in dozens of movies, directed a handful of classic films, and was the lead, playing a psychologist, in one of the most successful Israeli television series of all time, BeTipul, which was adapted by HBO into the American show In Treatment.

The funeral will take place Sunday in Nahalal at 4 p.m.

The public will be able to pay their last respects at Hall 3 in the Tel Aviv Cinematheque from 11 a.m. to 1 p.m., where his casket will be on display.

Dayan was born Assaf Dayan in 1945 in Nahalal, the son of one of Israel’s most celebrated politicians and military heroes and Ruth Dayan, a peace activist now in her late 90s. His parents had a very public divorce in the early 1970s, and Moshe left the bulk of his estate to his second wife, Rachel. Dayan’s sister, Yael Dayan, is a politician and author who wrote a book about her troubled relationship with their father. His brother, Ehud (Udi) Dayan, is a sculptor and writer.

Dayan went into acting as a young man, starring in the romantic and patriotic drama He Walked in the Fields, directed by Yosef Milo, in 1967, an adaption of the novel and play by Moshe Shamir. With his good looks and thoughtful air, he personified the face of the sensitive sabra that Israel liked to show to the world. Not long after that, he flirted with an international career.

In 1969, he starred opposite Anjelica Huston in A Walk with Love and Death, directed by her father, John Huston.

The film was a notorious flop that made Anjelica quit acting for decades. Dayan was then cast in the Hollywood production of Fiddler on the Roof starring Chaim Topol, in the role of Perchik, one of Tevye’s sons-in-law, but he reportedly did not speak English well enough for the producers and was replaced by Paul Michael Glaser.

Back in Israel, he continued acting and starred in one of the most successful Israeli films of the ’70s, Operation Thunderbolt, a celebration of the raid on Entebbe to free the Israeli hostages in which Lt.-Col. Yoni Netanyahu, the current prime minister’s brother, was killed.

In the 1970s, he turned his energy to directing and writing as well as acting, and he did so with great success. All in all, he directed 17 films. Two of the films he made with the comedy trio HaGashash HaHiver, were among the most popular Israeli comedies of the decade. He also directed Halfon Hill Doesn’t Answer (1976) and The Hit, better known as Shlager, in 1979.

His greatest triumph as a director was Life According to Agfa (1992), a black-and-white film about the alienated patrons of a Tel Aviv bar, which swept the Israeli film awards, winning eight awards, including Best Picture and Best Director and Best Screenplay for Dayan. The movie also received a special mention at the Berlin International Film Festival. He wrote and directed several more films, and in 2012 was nominated for an Ophir Award, Israel’s Oscars, for the screenplay of his last film, Dr. Pomerantz, in which he played a psychologist.

As the Israeli film industry underwent a renaissance in the past decade-and-a-half, he rode that wave and worked with some of the younger directors who emerged as the country’s new film elite. He seemed to become even more talented as he grew older, giving some of his best performances in recent years. He was the uncle of actress/director Shira Geffen and pop star Aviv Geffen, and had a role in Shira Geffen’s 2007 film, Jellyfish, which she co-directed with her husband, author Etgar Keret.

Although he was one of Israel’s best known secular, leftwing bohemians, he achieved some of his greatest success as an actor playing as ultra-Orthodox and national-religious characters.

What was most remarkable was that he seemed to disappear into these roles, never winking at the audience to show how different he was from the men he was playing, and was virtually unrecognizable.

In 2007, he played an ultra-Orthodox father taking his family on vacation in David Volach’s My Father My Lord, which won the Best Narrative Feature Prize at the Tribeca Film Festival in New York. He had a key role in Joseph Cedar’s first feature, Time of Favor (2000), in which he played a West Bank rabbi who exhorted his followers to destroy the Temple Mount. In 2004, he appeared in Cedar’s second film, Campfire, in which he played the head of a West Bank settlement.

As the local television industry blossomed, he was right in the center of it, starring in the series Parshat HaShavua (Portion of the Week), as well as BeTipul.

His 1997 black comedy, Mr. Baum, has been remade in the US as The Angriest Man in Brooklyn, starring Robin Williams, and that film is set to be released later this month.

Dayan was married and divorced several times, and had four children with his ex-wives and other women: Amalia Dayan and Avner Dayan, with ex-wife Aharona Melkind; Lior Dayan, with ex-wife Caroline Langford; and Assia Neumann Dayan, with former girlfriend Augusta Neumann. He was also married to actress Smadar Kilchinsky and sculptress Vered Tandler-Dayan. Tandler-Dayan made a movie about him, called Living, Period, in 1999.

The actor had a serious substance abuse problem that in his later years, at times, overshadowed his professional success.

In 2006, when he won the Ophir Award, the prize of the Israel Academy for Film and Television, for Best Actor for his performance in Things Behind the Sun, where he played the patriarch of a dysfunctional family, he reeled onstage and seemed to have difficulty finding the microphone, then launched into a barely coherent monologue and refused to leave the stage while the rest of the evening’s awards were announced. It was a moment that in many ways was emblematic of Dayan’s entire life. He was coming off a year that any actor would envy – in addition to Things Behind the Sun, the actor was starring in BeTipul, and had won the Best Supporting Actor Ophir the previous year for Comrade – yet was obviously so troubled. It was no secret that he had a drug problem, and because of that and his stature in the film industry, no one made a serious attempt to get him off the stage.

A tribute to Dayan on “The Jerusalem Post” can be found here. 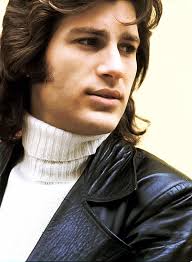