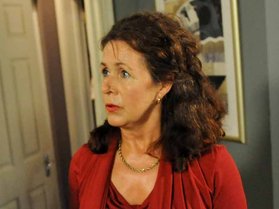 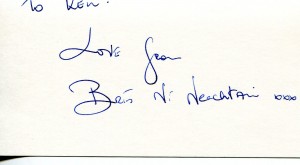 Brid Ni Neachtain is a brilliant actress from Connemara.   She starred as Rose in the stage version of “Dancing at Lughnasa”.   She is married to Fiach Mac Conghail of the famed Abbey Theatre.   Her movies include “Cre na Cile” in 2007.

Biography – Brid is a native of Galway and was member of the Abbey Theatre Company until 1999. Amongst her favourite productions were:Translations, Mary Makebelieve, Boss Grady’s Boys, The Mai, Lower Depths,Riders to the Sea, The Playboy of the Western World (Hong Kong Arts Festival), The Well of The Saints (Perth International Festival), The Great Hunger (Edinburgh Festival, London, Paris, New York, and Moscow). Bríd played Rose in the world premiere of Dancing At Lughnasa (Abbey Theatre, Royal National Theatre, West End and Broadway). She appeared in Fishamble’s production of Consenting Adults and as the Mother/Witch in Hansel and Gretel for Storytellers Theatre Company. She appeared in Portia Coughlan directed by Brian Brady at the Peacock Theatre and in the role of Auntie Ah in Woman and Scarecrow directed by Selina Cartmell at the Peacock Theatre, Dublin. She appeared as Juno inJuno and the Paycock directed by Andrew Flynn for the ART and Cork Opera House on national tour across Ireland. Brid appeared as Bridget in the Frank McGuinness play There Came a Gypsy Riding directed by Padraic McIntyre for Livin’ Dred Theatre Company and appeared in Here We Go Again Still by Christian O’Reilly for Decadent Theatre Company, Galway. Brid appeared in Marina Carr’s Woman and Scarecrow directed by Geoff Gould for the West Cork Theatre Festival and she recently appeared in Marina Carr’s new play 16 Possible Glimpses directed by Wayne Jordan at the Peacock Theatre for Dublin Theatre Festival 2011. Brid recently appeared in Little Women by Louisa May Alcott, in a new adaptation by Anne-Marie Casey, directed by Michael Barker-Caven in the Gate Theatre. Her most recent theatre appearances include Doubtdirected by Andrew Flynn for Decadent Theatre Company, Woman and Scarecrow directed by Geoff Gould for Blood in the Alley Theatre Company and Skull in Connemara directed by Andrew Flynn for Decadent Theatre company on national tour.

Brid has also worked extensively with Taidhbhearc Na Gaillimhe, appearing there in Moonfish Theatre’s production of an Irish language version of Ibsen’s An Enemy of the People (Namhaid don Phoba). For an Taidhbhhearc she also notably appeared in Cré Na Cille (for which she was nominated for an Irish Times/ESB Award for Best Actress , 2003) and in the feature film version of Cre Na Cille as the central character Caitriona, directed by Robert Quinn for TG4/Telegael for which she was nominated for a Best Actress Award in the Irish Film and Television Awards 2008. She appeared in Wildfire Films Irish language comedy drama An Crisis on TG4. Brid most recently appeared in Rasai Na Gaillimhe directed by Robert Quinn for TG4/Telegael and will soon appear in Corp agus Anam produced by Magmamedia for TG4.

The above entry can be accessed online here.