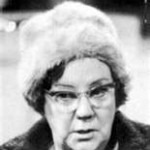 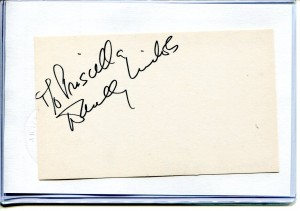 Dandy Nichols was born in Hammersmith, West London in 1907.   She is best known as the wife of Warren Mitchell in the classic television series “Till Death Us Do Part” in the 1960’s.   Her films include “Hue and Cry” in 1947, “The Winslow Boy” and “The History of Mr Polly.   In 1970 and 1971 she won widespread critical acclaim for her unique stage performance in  “Home” both in the West End and on Broadway with Sir Ralph Richardson. Sir John Gelgud and Mona Washbourne.Dandy Nichols

Till Death Us Do Part (1965), The Fallen Idol(1948) and O Lucky Man! (1973). She was married to Stephen Baguley Waters. She died on February 6, 1986 in London.   Whereas Edith Bunker was referred to as a “dingbat” by husband Archie, Dandy’s Else was referred to as a “silly old moo” by her husband Alf.   Two series of sequels of Till Death Us Do Part (1965) were created. Dandy died during the filming of the second sequel and her death was incorporated into the series; the remainder of the series dealt with Alf’s life as a widower.   Dandy became a 60s TV star in middle age with the British comedy classic Till Death Us Do Part (1965) in which she played Else Garnett, the beleaguered wife of Alf Garnett, a cranky, bigoted type. The series caught fire and an American version was produced in the 70s, All in the Family (1971), with Jean Stapleton‘s Edith Bunker, Dandy’s counterpart.  British minor comedy character actress who made a lasting career playing frumpy wives (complete with bathrobe, hairnet and curlers), cockney scrubwomen and a constant revolving door of domestics.   Replaced Gretchen Franklin in the role of Else Garnett in Till Death Us Do Part (1965) after Franklin was unable to break her theatre contract.