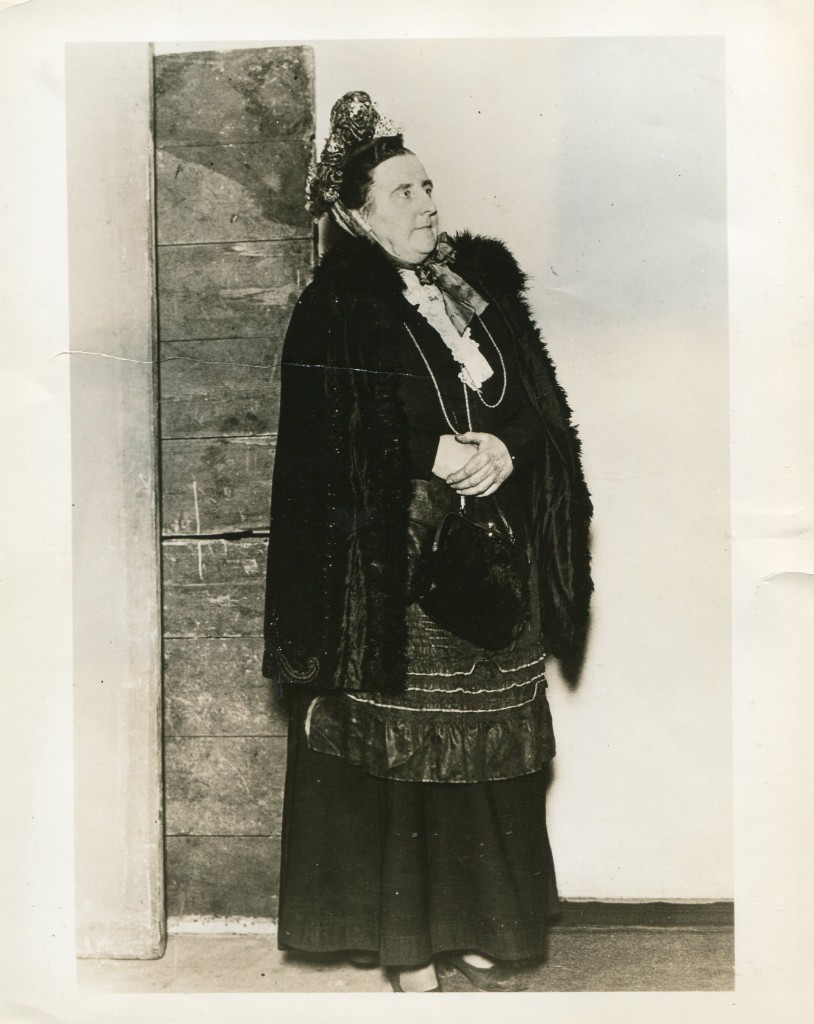 She was born in Kilkenny, daughter of Dr. Barry Delany, who died when she was three months old. She was educated in Galway and originally intended to train for the opera, as she had a fine singing voice. However, she was accepted into the Abbey School of Acting by Lennox Robinson. She made her debut on the stage in Edward McNulty’s comedy The Lord Mayor in 1914.[

She quickly gained a reputation as a noted comic actress and singer. She became identified with Maisie Madigan in Juno and the Paycock and Bessie Burgess in The Plough and the Stars (both by Sean O’Casey), as well as the Widow Quin in Synge’s Playboy of the Western World.

Delany, Maureen (c.1888–1961), actress, was born in Kilkenny, daughter of Dr Barry Delany, medical officer to the Kilkenny mental home, and his Kerry-born wife (née Nagle). Her father died when she was three months old. She was educated at the Dominican College in Galway and originally intended to train for opera as she had a fine singing voice, inherited from her father. However, she was accepted to the Abbey School of Acting, then run by Lennox Robinson (qv) and J. M. Kerrigan (1885–1964). After training she made her debut on 13 March 1914 as the mayoress in Edward McNulty’s comedy ‘The lord mayor’, and was commended by the Evening Mail. She quickly became a staple of the Abbey company and as early as 1916, the inveterate playgoer Joseph Holloway (qv) was praising her acting as ‘delightfully explosive’ (Holloway, 189). He was a constant admirer and in 1920, commenting on ‘The golden apple’ by Lady Gregory (qv), he noted that Delany’s ‘comic art and figure grow apace . . . there was a whimsical drollery about all she did’ (Holloway, 207). Delany was by this stage a noted comic actress and singer and among the best loved of the Abbey players. Lady Gregory found her rendition of ‘Oft in the stilly night’ in ‘Aristotle’s bellows’ in March 1921, very fine. Sean O’Casey (qv) was also an admirer and Delany gave vent to her full comic potential to become identified with two of his most noted character parts – Maisie Madigan in ‘Juno and the Paycock’ and Bessie Burgess in ‘The plough and the stars’. O’Casey even introduced a song for Maisie Madigan at her request. After the riotous opening of ‘The plough and the stars’ in February 1926, the Irish Times reported that a member of the audience had deliberately struck Delany in the face, but the actors themselves denied this.

Another part which Dublin theatregoers considered she made her own was the Widow Quin in ‘The playboy of the western world’ by J. M. Synge (qv). However, the critic Hugh Hunt (qv), assessing her career, noted that she played all her famous character parts in the same manner: ‘Large, warm-hearted, with a permanent twinkle in her eye . . . Maureen was not a great actress, but she was a superb performer. For over twenty years she was to play herself on the stage without varying her characterisation by a twitch of her eyebrow, to the utter delight of her public’ (Hunt, 118). The Dublin audience’s appreciation probably prevented her development and froze her mannerisms; the American critic George Jean Nathan, writing on the Abbey’s 1937 American tour, called the company ‘a caricature of its former self . . . [it] is obviously unable to control its fundamentally talented but personally over-cocky actress, Maureen Delany, and to prevent her from indulging in an outrageous overplaying, winking, snorting, and mugging that wreck any serious play she is in’ (Newsweek, 27 Dec. 1937). Her Times obituary noted that the Dublin audience often began to laugh even before she spoke.

In 1940 she appeared as a housekeeper in ‘Where stars walk’, the earliest comedy of Micheál MacLíammóir (qv), at the Gate, and thereafter appeared in numerous Gate productions. She had few film appearances but was part of the talented cast of mainly Irish actors in Carol Reed’s thriller Odd man out (1947), set in Belfast. In the late 1940s she moved to London, where she appeared in small character roles, getting mainly good reviews although The Timesnoted of her performance in Noel Coward’s ‘Waiting in the wings’ at the Duke of York’s Theatre, September 1960, that she could not help overacting. She died in her room at a London Hotel on 27 March 1961 and was predeceased by her husband Peter O’Neill, whom she married about 1947; there were no children