Terence Hill was born in 1939 in Verona, Italy.   He began his career in Italian westerns.   He went to Hollywood in 1977 and made “Mr Billion” and “March or Die” opposite Catherine Deneuve.

erence Hill was born as Mario Girotti on March 29, 1939 in Venice, Italy to a chemist. His mother was German, and as a child the family lived near Dresden, Saxony, Germany where they survived the Allied bombings of World War II. Italian film-maker Dino Risi discovered him at a swimming meet and he made his first film at the age of 12, Vacation with a Gangster (1954) (Holiday for Gangsters). He continued acting to finance his studies and motorcycle hobby. After studying classical literature at the University of Rome for three years, he decided to devote full time to acting. In 1962 he appeared inLuchino Visconti‘s The Leopard (1963), He then signed a contract for a series of adventure and western films in Germany. In 1967 he returned to Italy to play the lead inBlood River (1967). While on location in Almeria, Spain, he married an American girl of Bavarian descent, Lori Zwicklbauer, who was the dialogue coach for the picture. The producers of this movie wanted him to change his name. He then got a list with 20 names on it and 24 hours time to choose one of these names. He decided to take Terence Hill cause he liked it the most and it has the same initials as his mother’s name (Hildegard Thieme). They only told the public that “Hill” was his wife’s name out of publicity reasons. At this time of upcoming feminism a man who took his wife’s name was something special. In 1976 Hollywood called and he appeared in March or Die (1977) with Gene Hackman and starred in Mr. Billion (1977) with Valerie Perrine. Since then he has concentrated on action/adventure films starring himself and often working with long time partner Bud Spencer. Terence lives in Massachusetts and is a film producer, as well as talented and respected actor. 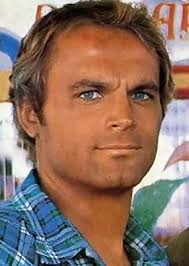