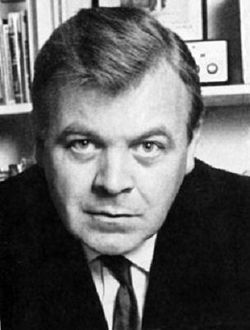 Children: Jane Wymark (b. 31 October 1952), Rowan Wymark ( b. 1954), Dominic Wymark (b. 1960), Tristram Wymark (b. 1962).   He died just as the film he was currently appearing in, Cromwell (1970), was about to be released in the U.S.   Was offered the part of “Theodore Maxible” (played by Marius Goring) in Doctor Who (1963): Evil Of The Daleks” but illness prevented him from taking the role.   Born and raised in the Grimsby area. Wymark View is named after him.
Died of a heart attack three days before opening in an Australian run of Anthony Shaffer‘s “Sleuth”, in which he was to play author Andrew Wyke, at Melbourne’s Playbox Theatre in October 1970. His body was discovered by the actor John Fraser.   Collapsed onstage at the Devonshire Park Theatre, Eastbourne in October 1969, due to a severe nasal hemorrhage.
British character actor with radio and stage experience from 1951. Studied at University College in London and learned acting at the Old Vic Theatre School. Toured South Africa in 1952 and subsequently appeared in many Shakespearean roles in Stratford-upon-Avon. Busy television actor from the late 1950’s, popular as ruthless tycoon John Wilder in The Plane Makers (1963). Also noted for his voice-overs for Winston Churchill in two documentary features.
Was asked to play The Second Doctor in Doctor Who (Source Ice Warriors DVD Production Notes).